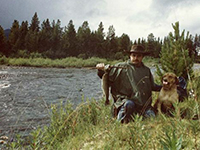 In spring 1972, a young Rudy Nielsen ran off, clutching a single sheet of paper with handwritten directions to a nine island property in British Columbia’s Fraser River at Crescent Spur, between Prince George and McBride. Almost 50 years later, that 119 acre parcel has become part of the foundation for deals stretching across thousands of acres of British Columbia, including ranches, islands, waterfront, timber holdings, and ghost towns. NIHO Land & Cattle Company is known as having been one of the largest private owners of recreational land in Western Canada, and Rudy Nielsen, R.I., F.R.I., company President and CEO has become an internationally recognized expert on rural land in British Columbia.

The private, recreational retreat on the Crescent Spur islands was where Rudy Nielsen honed the skills passed down from his father (a trapper in his early days) – the foundations for survival in the back woods, including canoeing, fishing, hiking, and all about nature. In fact, Rudy relates those survival skills to his success in the business world today.

In the 1980’s, the original islands were sold, and over the next six year period, NIHO bought some 30 properties, evolving from a recreational land holding company into a land development company. Over the next several years, NIHO’s inventory grew from 30 properties to over 300.

Today, NIHO is recognized as an industry expert in recreational lands, property valuations and market trends in B.C.

NIHO’s recreational land holdings were highly diversified. Our properties were scattered throughout British Columbia so that if one area lost its demand for recreational real estate, another area could still remain active. We have purchased, developed, marketed, and sold well over 700 acreages and projects in one 10 year period alone. 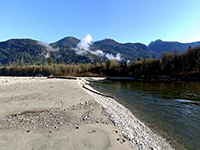 We look for the highest and best use of each of our properties for added value, which could include timber value, gravel deposits, peat moss, or subdivision potential. We have developed private lakes on properties, renovated cabins and resorts and built miles of fences and gates. We have also turned land with very little value into top quality hay production land.

We have always structured our prices so that a new generation of land owners can experience Rudy’s enjoyment of the B.C. outdoors. NIHO has, in the past, offered properties for sale from RV lots in ghost towns from $3,900 to islands and peninsulas, both ocean and fresh water, in the $300,000 to $1,000,000 range for exotic retreats. NIHO’s current holdings include  734 acres on Pitt Lake in the Lower Mainland and a private island in North-Central BC.

Partners on our Trail 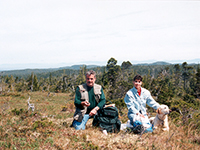 sister company Landcor.com, is the leader in defining and valuating property, updating all sales in B.C. on a weekly basis. This unique system includes sophisticated computerized databanks of information on land, aerial photography and analysis, and mapping information. Our Geographic Information System (GIS) enables Landcor to overlay mapping information and analyze properties in relation to potentially hundreds of other features of interest, giving Landcor the vision and reach to accurately value any property in BC. This system enables speedy compilation of property data and constant tracking of changing market trends.

NIHO is the founding partner of LandQuest Realty Corporation, a top licensed real estate firm with numerous real estate professionals found throughout the province. They specialize in the marketing of ranches, resorts and other recreational and rural properties.

We’ve come a long way over the past four decades, but our heart is still here – in our majestic mountains, the wild backwood forests, the pristine lakes, the winding rivers. NIHO Land & Cattle Company (NIHO stands for Nielsen Holdings), founded in Prince George, remains a 100% British Columbian company.

Rooted in our history, guided by the love of our home, forging a legacy for future generations of landowners.

We are NIHO Land & Cattle Company.