How to Build a Private Lake 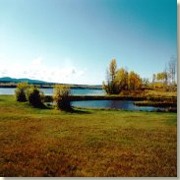 Over the past 45 years I have built a number of small lakes and they are much easier to build then you would imagine. But why build your own lake in the first place? Why not just buy a parcel of land on an already existing lake? I found that in all my years in the recreational real estate business one of the most frequently asked questions about a parcel of land is "has the property got any water frontage on a lake or river?" The majority of recreational properties do not have water frontage because there are few lake frontage properties available relative to properties without water frontage. There are both advantages and disadvantages to owning lakefront properties.

Firstly, it is much more expensive to purchase lakefront property, and the lake has to be shared with other people and, in most cases, neighbours are close enough that you could throw a stone at their houses and hit them.

The cost of waterfront properties is substantially higher then non-waterfront. Of course there are advantages to being on a large lake, such as trolling for fish, water skiing, boating, sailing and a number of winter sports. So you must weigh the pros and cons of paying that extra money for lake frontage or building your own lake. Also, remember, the majority of properties that do have lake, river/creek frontage are in valleys and not on top of hills or mountains. A mountain property usually has total privacy and fantastic views. If only it had a lake! Anything is possible if you put enough cash into it, so why not buy your dream property for an affordable price and build your own lake?

Two of the biggest lakes I ever built both started as small holding ponds no more then four feet deep. The first pond was for some ducks to swim around in so my two young sons could watch them, and the other pond was built to hold trout for a few months. I originally had in mind only one to two hour projects for both ponds, intending to build them 4 feet deep and 10 feet x 10 feet in length and width.

The first lake I built was at a small ranch I owned. It was just out of town and we used it as a weekend retreat. The ranch consisted of a small 2-bedroom house and a yard full of barns and sheds. I had an old D6 cat that was used around the place for odd jobs like keeping the road snow plowed in and to spread gravel in the summer. 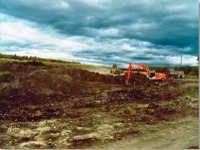 Originally I had bought my two sons some ducks but the plastic tub we had for them was not large enough, so I decided I would get up early the next morning and build a four-foot deep pond for the ducks to swim around in. I got up at daybreak next morning; well before anyone else was up. I fuelled the "Cat" up and got ready to start the pond. Deciding to locate the pond on one side of the barnyard, I slowly drove over to this spot, dropped my blade and started to work. I built a 10 ft. x 10 ft. pond, 4 feet deep, in one hour. I got off my cat, jumped in the hole, and it just looked too small,so decided I had to made it a little bigger. And from there I just kept making it bigger and bigger and bigger . I drove that cat all day and through most of the night, only stopping for a beer, a sandwich and supper. I slept but a few hours and early the next morning eagerly continued building the pond.

In the end I had built a square moat around the barnyard with an island in the middle! On the island, before we dug the last bridge of dirt away, we made a big mound for a rabbit hut, complete with tunnels. It was great. I rented two pumps and they worked for three days and nights to fill the lake. My kids really enjoyed the results and had great fun with their private island and the attached small wooden bridge. The private island also protected the rabbits and ducks from any predators.

The second lake I decided to build was much larger. I used my own D6 again but hired other equipment as well. The first thing I had to do was locate a low spot in the terrain where water from the surrounding hill would run. I found a swampy area and small gullies running into this low swampy area, so I determined that this was the spot where water from the surrounding hills collected. Next I needed to know whether my lake would hold water and for how long. It would be no use building a lake and filling it and then having all the water drain out. To determine this I used a hoe and had the operator dig down as deep as possible and about a couple of buckets wide. He went down about 16 feet. I then put my two pumps to work and filled this hole with water. On the side of the hole I marked the water level by putting a stick in the side. I left this overnight and checked the level next morning. The water had gone down only a few inches so I knew the hole would contain water, especially when the sides had been in water longer and were saturated. I now knew my pond would hold water naturally and that I wouldn’t have to use a rubber liner. This would have been costly and would have made the pond much smaller. 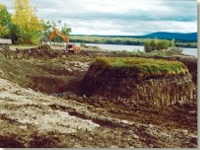 Next, my helpers and I got to work building a lake. We used my D6 cat, a John Deere hoe and two dump trucks. This is the most feasible way I found to build a lake. We went straight down on one side of the pond to make it very deep, while on the other side we built a gradual slope to make it shallower. This gradual slope was also used to get the trucks in and out. The hoe would dig, continually filling the truck; one truck would load up, then drive out and empty into a low spot a few hundred yards away. The other truck in the meantime would be loading. I found this combination worked best. We left a fairly large island in the middle of our lake and went down 24 feet. I have never measured the lake, but it is approximately 300 feet by 600 feet.
We started in very loamy conditions, which I knew maintained water, so as we were digging down, I kept a constant watch on the sides of the hole to make sure the soil condition didn’t change. If we had hit one bucket of sand or gravel I would have stopped immediately, and that would have been the depth of my lake.

There are two reasons to go down so deep when stocking a pond with trout: one is because in winter time you need to have lots of room under the ice for the trout to maneuver, and two, in summer the top of the lake gets warm and the trout can get down to the cool water.

If you want to have trout you need a permit from the Department of Fisheries and to get this permit you have to follow their specifications for building a lake. The most important thing is to make sure that, if you are close to another waterway, none of your fish get out of the pond and no wild fish get into it. We had to do this because we built our pond right beside a large lake. We installed a large eight-inch overflow pipe to run out of the pond into a large wooden holding tank. The pipe from the lake entered the tank near the top and another eight-inch pipe went out from the top of the tank to a large ditch that drained into the lake.

When we got down as far as we wanted to go, it was time to get the machinery out and get some water in. We owned two small wayjax pumps, and we rented two more. It took just about a week to fill the lake, running the pumps constantly day and night. Once the lake was full even I was surprised at how large it really was. We have had this lake for eight years now and have never yet had to add any water to it with pumps. The winter snows replenish the lake every year and summer rain showers help to maintain the water level.

After the pond was built I landscaped the entire area around the pond with lawn and willow trees. The willows provide shade for the trout and habitat for mosquitoes and mayflies, which in turn fall into the pond and become food for the tout. Another nice feature is that, having the lake out in the open, except for the willow trees around the perimeter, the evening winds naturally oxygenate the pond. Many a morning I will take my coffee and sit by the pond on a picnic table to watch the ducks and geese swimming around. 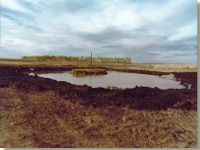 We have yet to put any trout in this lake but to my amazement, one early morning as I was taking a walk, I sat down beside the lake watching the ducks swimming around, when I noticed a school of fish swimming in there. I know we never put any fish into this lake, and I know they couldn’t have come up the pipes through the trap or through three very fine filter screens, so how did they get in there? The only way I can possibly think of is that an eagle somehow picked up a fish in the lake, dropped it into our lake and that somehow the eggs hatched. Lo and behold, fish. Two families did move into the lake right away - one was a family of ducks that built its nest on the island and the other was a family of muskrats. Now, many years later, we have many families of ducks and muskrats.

When building a pond, be sure to have natural drainage from both the snow run off and the rainfalls. If I had not been able to utilize natural run off, I would have drilled a well, put in a pump and then just let it run to create a natural waterfall over some rocks.