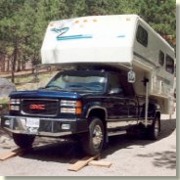 This is a true story that took place some years ago. It is about three guys who decided to go elk hunting in late fall, in a camper. They took off early one morning under clear skies and with a camper stocked with enough food and beverages for five days. After driving for a full day, they arrived at their favourite hunting spot in the East Kootenays and proceeded to light a fire and set up a cozy camp. Nothing in the world is better than getting up on a clear, frosty morning and not hearing a sound except for your own breathing. As you walk, the ice crystals break beneath your feet giving a feeling of solitude and contentment. For five days it was great hunting and total relaxation.... good food, good company and good beverages.

Early in the morning of the fifth day, after a hearty breakfast of bacon and eggs, they decided they had time for one more short hunting expedition before leaving for home. On this last hunt one of the three fell into a creek while crossing a log and got soaked right up past his waist.

He had a little difficulty getting out because even though the main part of the creek was open and flowing, he had to break some ice closer to shore. Fortunately he was less than thirty minutes from camp. All three met at the camper at the appointed time, but the fellow who had fallen through the creek was very cold and shaking so badly his friends were worried about him. They lit a fire, and after sipping some hot rum, decided he should strip naked, get into a sleeping bag in the back of the camper, and get his circulation back. This he did. His two friends hung up his clothes in the camper to dry, climbed into the front of the truck and headed for home. 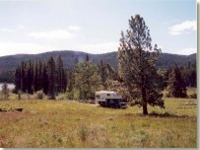 About two hours into their return trip, on a secondary gravel road "Mother Nature" called to the guy trying to get warm in the back of the camper. He crawled out of the sleeping bag and knocked on the back window (which in camper talk means "stop, I have to visit Mother Nature"). So the driver stopped to let his friend out, but continued talking to his buddy beside him. The guy in the back opened the door, looked out, saw no one, decided his clothes were too wet to put on, and climbed out, still naked. As he was relieving himself a gust of wind came along and slammed the camper door shut! The two guys in front, were just cracking a beer and still busily talking about the one that got away, when they heard the door slam shut. They thought their friend had climbed back inside, so after waiting a minute to give him time to get back into the sleeping bag, they took off.

The naked friend, still relieving himself, and with a very surprised look on his face, watched the camper pull away. Thinking they were playing a joke on him, he expected them to go a few hundred yards and then come back.

He stood there for several minutes when he heard a car coming. Being naked, he ran across the ditch and into the trees. Realizing what had happened, he watched the vehicles go by and continued to hide there for two hours, waiting for his friends to return for him. By now it was late afternoon and getting very cold. 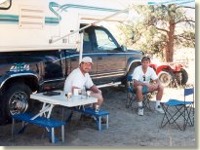 Finally he decided he was now on his own and had two choices. He could freeze to death and keep his dignity, or stand on the road, lose his dignity, and hitch a ride. So he broke off two aspen branches and slowly walked out to the road holding one branch out in front and one branch behind. He stood beside the road with his branches and realized he would have to drop one so he could hold a hand up to hitchhike. He dropped the back branch, faced the traffic and held out his thumb. Many cars went by, all slowing down and giving him strange looks but not stopping. Just before dark, very cold and very worried, he decided he had no choice but to stand in the middle of the road and force a car to take him to the nearest town. Finally a guy stopped, our hitchhiker explained his story and the good samaritan offered him a ride and his jacket (which was a couple of sizes too small for him).

He then drove to the nearest town with a police station, where our "victim" walked in, pulling the borrowed jacket down as low as possible. With no wallet or identification, it took 30 minutes to explain what happened and to borrow a pair of pants, a shirt and oversized shoes.

In the meantime the camper had traveled 300 miles before it had to stop for gas. One of the two guys decided to check the camper to see how their friend was doing. They soon realized what had happened and immediately turned around and headed back! It was not until two in the morning, after many phone calls with various police stations that everyone was reunited.

So camper owners, when "Mother Nature" calls, stay dressed, take your wallet, or best of all, buy a camper with a toilet.