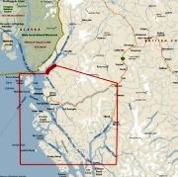 British Columbia’s North Coast is a fisherman’s paradise. Not only do you have opportunities for deep sea fishing in the productive waters of the Pacific Ocean, fly fishermen can set their lines for steelhead and salmon on the many productive rivers and streams in this area. Rod and reel fishermen can head towards the lakes in this area to hunt for freshwater trout. This month, NIHO takes a look at fishing conditions in the Prince Rupert to Kitimat area.

(NIHO’s Note: Regulations regarding fishing in British Columbia are subject to change. Most guides we spoke to note that there are restrictions on when you can fish on several of the rivers in this area. Check with a local guide or the Ministry of the Environment for current conditions. All fishermen in British Columbia must obtain a fishing license before fishing. These licenses are available in most sporting stores.)

Prince Rupert is internationally renowned for its salt water fishing opportunities, supporting stocks of many large gaming fish species. Keith from Fisher King Charters suggests that the best time to come for the large spring salmon is from May to late June. He told us that coho and pinks can be caught from late June through September. Halibut can be found at any time of the year. When we asked him where the best spots to catch these fish were, he replied, “Follow the fish.” From May to the end of June, he takes his clients north of Prince Rupert for the best fishing. From July to the end of the season, he suggests heading south and west, as fishhead for the spawning grounds.

Another spot for saltwater fishing is the productive Douglas Channel. Rick from Anna Christine Saltwater Fishing Adventures told us that the spring salmon in this area are very active from May through July. Try Money Point, close to Goble Point, Bishop, and Cleo Points, or even at the mouth of the Kitimat River. Rick noted that the best time of year for coho is the middle of July through to the middle of September. He suggested fishing around Fish Trap Bay near Ursula Channel by Gribell Island. Rick told us that the pink salmon run was “tremendous” last year, and suggests fishing towards the outside of the channel during July and August. Halibut is good for stationary jigs, as he noted that trolling for halibut was not very successful.

The Skeena River is noted for its gigantic steelhead. Tracy from Steelhead Heaven says that the best time to come up for these feisty fish is in the fall, from August through to October. While you may catch some cutthroat or dolly varden while searching for the steelhead, Tracy says that any of these fish will give you a "tight line". The Skeena River is also recognized as one of the most important salmon producing rivers in the world. All five species of salmon can be found here, and he suggests the best time to come to this area is in July. Randy from Northcoast Anglers' favorite weeks on the Skeena are the last week of July and the first week of August. He told us that is plentiful numbers of a variety of fish during this time. You never know what you're going to catch.

There are several smaller rivers in the Terrace area, and many of them are just as productive as the larger rivers.

Randy suggests the Lakelse River is great in the spring for trout and steelhead. The Kalum River is also good for steelhead in the spring, especially since there are less trout in these waters than some of the other rivers. From September to December, Randy suggests heading to the Copper River for the fall/winter steelhead run. He notes that, weather permitting, the best time for steelhead on the Copper is in November, as the fish get bigger and better throughout the year.

Brenda from Doorselfin Adventures loves the Kitimat River. In fact, she predicts a bumper crop of chinook and coho salmon this year. She notes that the short river system means that the fish are coming straight from the saltwater, so the resulting fight for the fisherman is incredible. When we asked her for the best spots on the river, she told us, “no matter where you stand on the river, the fish have to get past you to get where they need to go.” Chinook season is mid May to mid July, with the 40-60 pounders arriving in mid-June. Pink salmon and chum show up in July and August, with coho swimming upstream in June. The Kitimat River is famous for its steelhead, with a great spring run from March to mid-May. However, Brenda warns that the fall run in this river is “skeletal”. She strongly notes that Kitimat River is a non-bait river from May 15-Aug 31. You must use barbless salmon jigs when fishing here. Local conservation officers are very strict in enforcing this.

There are several lakes in the Prince Rupert area

Lakelse Lake near Terrace is one of the most popular lakes for water sports of all types in this area. Randy suggests trying at the mouth of the Lakesle River for the most fish.

Onion Lake near Kitimat has great fishing, especially ice fishing, according to Brenda. She noted that dolly varden, rainbow, and especially cutthroat trout are plentiful here.

It's been noted that most of B.C.'s summer fish all originate in this area of BC. So come to the home of the feisty fighting fish, and catch yourself a trophy. Come fish the Prince Rupert area!