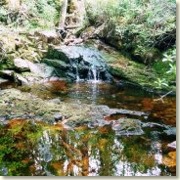 Many years ago, I bought a number of 160 acre parcels sight unseen on the northern part of Vancouver Island in British Columbia. These properties were very remote and inaccessible by road. To view them, I would either have to take a helicopter to the properties or hike into the properties and spend a few nights under the stars which, while I prefer, I did not have time for. For about 15 years, I did not have time to travel to these properties, but I remained curious as to what they were actually like. I had studied the air photos through a stereoscope and knew the lay of the land. The two properties in particular which I wanted to look at could have been old homesteads from the early 1900’s. Finally, one summer weekend, I decided to take a weekend trip and go up and explore these two properties. Since I had a limited amount of time for this trip, I planned on driving to a small northern coastal town that had a helicopter base. We would charter a helicopter to the site the next morning.

I went to my wife and asked her if she wanted to come along and bring our Golden Labrador.

She said, “Yes, I’d love to go. I haven’t been out in the field with you for some time.”

So early the next morning, the three of us took the ferry to Vancouver Island and drove to Port McNeill, one of the most northern towns on the island. Once I had arranged for our helicopter for the following morning, we found a cozy hotel overlooking the ocean for the night. We walked to a really neat local restaurant for a very nice seafood dinner. Returning to the hotel, we got a good night’s sleep. We knew the next day would be long and demanding.

Early the next morning, we took the short drive to the helicopter hanger. After showing the pilot the maps and air photos of the two remote properties, we strapped ourselves into the chopper and were airborne. It was a gorgeous warm sunny day with not a cloud in the sky. We knew that we would be so far out in the backcountry that there wouldn’t be another person around for miles. I was up front directing the pilot to our destination using the maps and, when we got closer, the air photos.

From the helicopter I spotted the first property. After we circled it a couple of times I saw an old homestead. I knew its exact location, because I had seen it on the air photo. The pilot landed near the old homestead in a small meadow and we got out. I told the pilot to pick us up around six that evening at the second property. As the helicopter took off, my wife and I picked up our packsacks and called for our dog as we began exploring the property.

The nicest thing about flying by helicopter is that when he takes of and disappears over the horizon it is dead quiet, not a soul around. No revving of car engines, honking of horns, no cell phones going off. It’s the greatest feeling in the world.

The homestead included an old log cabin from the turn of the 20th century. While the roof and part of the wall had either collapsed or rotted away, its foundation remained intact. Close to this cabin were the remains of an old garden and a mine, showing where an early settler had tried to carve out a living long ago. I also found an old gold pan and part of a shovel.

These properties were extremely boggy like tundra in Northern Canada. The layers of moss were so thick that in places you could sink down about a foot into the damp thick layers. We also had to avoid the many water holes which dotted the landscape. There were even a small number of small lakes. Clinging to the top of this moss was very dry grass. There were patches of short stunted cedar and hemlock trees populating the little forest clearings throughout the property. As we got closer to the creeks on the property, we noticed that the cedar, hemlock and spruce trees became larger and sturdier.

We explored this property for about four hours, and then found a nice spot overlooking the valley for our picnic lunch. My wife makes very good lunches consisting of sandwiches, vegetables and fruit. When she packed her packsack, she protected the sandwiches by using a plastic container, much to my dismay, as this meant carrying unnecessary extra weight. However, these sandwich containers would later save us from a very embarrassing situation.

The second property was located about four miles northwest of the first property. While my wife was a little nervous about hiking cross-country, with my experience in the bush, I was very confident that I knew where I was going. I knew that I could get us there without any problems. We crossed creeks and went around lakes. We navigated our way around and through stands of timber, always consulting our air photos. It was a very exciting hike, as one moment we could be in very thick brush and the next we could be in a clearing, sinking through the deep damp moss. 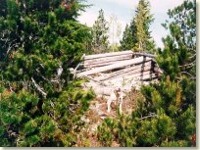 After hiking for about two hours, we found the second property. It was another old homestead with an abandoned cabin. We explored this 160 acre property for the next four hours, hiking around the little lakes and wading through the deep moss.

Around six in the evening, we knew the helicopter would soon be arriving. We climbed a small hill on the property and began to wait. We heard the helicopter in the distance, but as it approached, it began to circle around the first property 4 miles away where we had been originally dropped off that morning. I realized that it was probably a different pilot who did not know that we were on the second property. We realized if we didn’t do something, the pilot would head back to Port McNeill without us, thinking we were lost.

Whenever I travel with my wife, I carry a flare gun, normally stored in my Zodiac boat, in my emergency pack with my first aid kit. (Keep in mind that satellite phones and GPS didn’t exist yet.) So I shot a flare up into the air to get his attention. The pilot kept circling. I knew he hadn’t seen the first flare, so I shot a second flare up. This worked because the helicopter turned and began to fly over to us.

Soon after I had shot the second flare, my wife called out, “Rudy, there’s a forest fire down there!”

I looked and saw that my first flare had ignited the dry grass and small trees about 400 feet away. I ran down, whipped off my coat, wet it in a lake, and began beating the flames out. I circled the perimeter of the fire, and worked my way inward towards the centre of the fire. It took about ten or fifteen minutes to put out. However, by the time the helicopter landed, the fire was out.

I realized that the second flare had also landed in the dry grass, and the fanning of the rotating helicopter blades was acting like a bellows on the flames. The harmless spark had grown into a potential disaster. 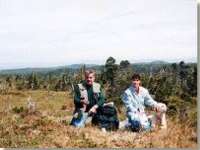 The pilot turned around and right away saw the fire through his windshield. He yelled for my wife to hang on and immediately took off. There was no time for her to close the door or even to buckle up. My wife hung on to her dog and the seat for dear life to stop from falling out. The pilot had acted quickly and knew that if the high octane gas in the helicopter had caught on fire, the exploding helicopter probably would have killed us all. The quick thinking and immediate action of the pilot saved the day.

As soon as the pilot had taken took off, I examined the situation and thought of the best approach.

Having many years experience in fighting forest fires, I realized that I would have to circle the perimeter of the fire first and beat the dry burning grass out. Then I would work my way into the centre of the fire. I began to beat out the fire around the perimeter using my damp coat. A small patch of 14 foot hemlocks in the center were also burning but I knew the perimeter had to be taken care of first. By this time the pilot had shut the helicopter down and he and my wife had run down to help me. The only tools we had were an axe and the empty containers from the sandwiches. The pilot and I worked with my wet coat and axe while my wife used the containers to splash water on the fire from some small ponds.

So the three of us working as a team circled the perimeter first to control the fire in the dead grass. After we had this area under control we moved to the centre of the fire and tackled the burning trees. As I chopped down the trees with the axe, the pilot, using my damp coat, put the fires on the fallen trees out.

It took us about an hour for us to put out the entire fire. We were full of soot and had ruined our clothing. However, I didn’t want to see my name in the papers as the man who burned down Cape Scott Provincial Park. I learned a lesson that day that I’ve never forgotten, and which I would like to pass along to you: never, EVER shoot a flare gun on dry land.