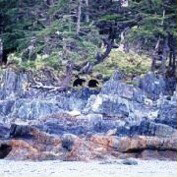 Haida Gwaii is located in north-western British Columbia, about 130 kilometres from the mainland. Commonly referred to as 'Canada’s Galapagos,' Haida Gwaii consists of two large main islands - Graham Island to the north, and Moresby Island to the south - as well as over 150 smaller surrounding islands. The total land area of Haida Gwaii is approximately 3,840 square miles; 156 miles (250 km) from north to south.

The climate is mild for most of the year, due to the currents of the Pacific Ocean. The average annual temperature is about 8 degrees Celsius (46 F), and, surprisingly, winter temperatures are higher than in inland B.C. Before bringing your shorts in February, though, keep in mind that cool misty weather can occur without much notice.

Access: Most people access Haida Gwaii by BC Ferries, which leave Prince Rupert and arrive at Skidegate on Graham Island. This trip lasts approximately six hours or is an overnight trip. Once on Graham Island, you will need to take a second ferry to Alliford Bay, on Moresby Island. This trip lasts about 25 minutes, and it is a further 15 minutes to Sandspit from Alliford Bay.

On the island, rental cars are available in Sandspit, and at Sandspit airport. However, note that the paved road ends in Sandspit. Most of the roads on Moresby Island are gravel, and there are no roads into Gwaii Haanas National Park - it’s only accessible by air or by boat.

History: Moresby Camp was named after Sir Fairfax Moresby, Commander-in-Chief of the Pacific Fleet from 1850-1853. This logging camp was deactivated in 1969, when the Alaska Pine Company moved the base of its forestry operations to Sewell Inlet. Since then, the remnants of the town have reverted back to the forest.

In 1987, under pressure from native and environmental groups, the federal and provincial governments created the Gwaii Haanas National Park Reserve/Haida Heritage Site, which removed about one-half of Moresby Island from the industrial land base.

Fishing on Moresby Island is excellent, with productive lakes and rivers nearby. Try fishing for Pink and Coho salmon in Deena River and South Bay, a short drive from Sandspit. Copper River offers excellent Dolly Varden, cutthroat, and coho fishing runs. The best lake fishing is found at Mosquito Lake and Skidegate Lake, southwest of the village.

Visitors are welcome at the Pallant Creek Hatchery, which is operated by the federal government. The hatchery is located between Moresby Camp and Mosquito Lake. Eggs are collected in late August through mid-October, and steelhead, chum, pink, and coho salmon are produced.

Moresby Camp has a seven-vehicle campsite, and there is a vehicle recreation site at Mosquito Lake, just west of Moresby Camp. If you drive back towards Sandspit, there are two other campsites on the eastern coast of Moresby Island: Grey Bay and Shelden Bay.

Moresby Camp is a popular site for launching kayaks to explore the Gwaii Haanas region. You must make reservations and check in with the Gwaii Haanas park office before leaving. The launch point at Moresby Camp allows you to kayak in the more protected waters of Carmichael Passage and Dana Passage. It takes about two days in good weather to kayak to the northern boundaries of Gwaii Haanas.

Moresby Camp is also the closest launching point to Burnaby Narrows, on the east coast of Moresby Island. This 1 km stretch is quite shallow at low tide, but is a great place to view ocean life, by kayak or by snorkeling off your boat. Creatures you can see here include starfish, sea urchins, moon snails, clams, needlefish, sea cucumbers, sea blubbers, and red crabs.

Gwaii Haanas is a large federal park located in the South Moresby region. There are no roads in this park, and access is by boat or chartered floatplane only. Visitors must make reservations with the Gwaii Haanas park office, and undergo a mandatory orientation session. Gwaii Haanas is full of wildlife and plant life not found anywhere else - including the rest of the Haida Gwaii. Haida Watchmen, guardians of the park, are found at the following five locations:

- K'uuna llnagaay (Skedans)- The northernmost of the Watchmen camps, and one of the most popular due to its accessibility. K'uuna llnagaay is one of the few remaining village sites with standing totem poles, as well as remnants of large longhouses. It is also the site of the alder tree with the largest circumference in British Columbia (7.1 metres or 23 feet!)

- T'aanuu llnagaay (Tanu)- At this site, the remains of longhouses face the shoreline on two beaches, separated by a rocky shoal. House pits and collapsed house posts, overgrown with moss, mark the sites where the longhouses once stood.

- Hlk'yah llnagaay (Windy Bay)- Windy Bay, on the eastern coast of Lyell Island, was the site of 1985 protests which led to the creation of Gwaii Haanas. The old growth forest contains trees over 1000 years old and as tall as 70 metres. Trails provide access to a forest of first-growth Sitka spruce and western red cedar, hung with thick lichens and carpeted with heavy mosses.

- Gandl K'in Gwaayaay (Hot Spring Island)- Called Hot-Water-Island by the Haida, Gandl K'in Gwaayaay was well-known for the healing and spiritual qualities of its natural thermal pools, which have made this a sacred place for the Haida people. There was once a village on the east side of the island, but little evidence of it is visible today. Visitors are asked to rinse off in the bathhouse before soaking in the Hot Springs.

- SGang Gwaay (Anthony Island, Ninstints)- SGang Gwaay was the main village of the Kunghit Haida, the most southerly of the Haida, who lived along the shores of this island until smallpox wiped out 90% of the more than 300 inhabitants. The village's display of standing Haida Mortuary poles is considered the best in the world, and in 1981 it was declared a World Heritage Site by UNESCO.