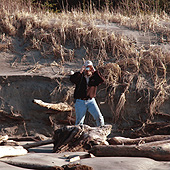 Area Data: Haida Gwaii, formerly known as The Queen Charlotte Islands, is located in north-western British Columbia, about 130 kilometres from the mainland. Commonly referred to as 'Canada’s Galapagos,' Haida Gwaii consists of two large main islands - Graham Island to the North, and Moresby Island to the South - as well as over 150 smaller surrounding islands. The total land area of Haida Gwaii is approximately 3,840 square miles; 156 miles (250 km) from north to south.

The climate is mild for most of the year, due to the Pacific Ocean’s currents. The average annual temperature is about 8 degrees Celsius (46 F), and, surprisingly, winter temperatures are actually higher than inland in B.C. But before bringing your shorts in February, keep in mind that you should be prepared for cool misty weather, which may occur without much notice.

This is a rainforest, so expect some rain - but not as much as you might think. Haida Gwaii gets the same annual rainfall as Vancouver.

Access: The most common way to get to here is by BC Ferries, departing from Prince Rupert and landing at Skidegate. This trip lasts approximately six hours, or is an overnight trip. Air service is also available, with daily Air Canada flights from Vancouver to Sandspit (on Moresby Island). Pacific Coastal Airlines also flies from Vancouver to Masset. North Pacific Seaplanes offers air service from Prince Rupert to Masset.

Once on the island, rental cars are available in the major centres, although keep in mind that the paved highway runs from Sandspit on Moresby Island up to Masset and Old Masset at the northern end of Graham, passing through the major centres. Moresby Island has only 30 km of paved road, although there are quite a few gravel roads, which are just as good as pavement. However, many are still active logging roads, so check with the local visitors’ centre to make sure the roads are not being used.

Major Cities: With a population of only 6,000, Haida Gwaii remains in its unspoiled, natural state. This is reflected in its resource-based economy, of which logging, commercial fishing, mining, and tourism form the backbone. Major centres include:

Masset: The northernmost community. You will find the Delkatla Wildlife Sanctuary, the Dixon Entrance Maritime Museum, and the Dixon Entrance Golf & Country Club here. Masset is also home to the largest log barge in the world, Haida Monarch, which can transport 15,000 tons of logs, the equivalent of 400 logging trucks! This is the entrance to Naikoon Provincial Park, and home to provincial camping sites, Rose Spit Ecological Reserve, and Niho Land & Cattle Company’s Naikoon & Dixon Estates.

Queen Charlotte City: Queen Charlotte is the Islands' administrative centre, as well as their first registered town site and the newest incorporated city in British Columbia. You'll find all services located here, including provincial and federal government offices, the RCMP station, the hospital, banking, groceries, and fishing and hunting licenses. You can make arrangements to visit Gwaii Haanas Federal Park at the Visitor Information Centre here. View the heritage buildings lining the main street, and shop in the specialty stores.

Sandspit: The only formal settlement on Moresby Island and the gateway to Gwaii Haanas Federal Park. The main airport is located here, as well as an 18-hole golf course at Willows Golf & Country Club.

Port Clements: The first incorporated town on Haida Gwaii, Port Clements was the supply centre for the Sitka Spruce logging operation for the construction of military aircraft during World War I. Port Clements Museum offers a look at pioneer life, and historical buildings allow visitors to temporarily step back in time. Also located here was the famous Golden Spruce, until it was cut down by a vandal in 1997.

Tlell: Home to the arts community. The Tlell River is famous for its salmon fishing and sandy beaches. Nearby is St. Mary’s Spring. Island legend has it that if you drink from the spring, you will return in the future.

Harbour Days in Masset, over the May long weekend.

Logger Days in Sandspit in late June and July.

Canada Day in Port Clements is spread out over several days, including a ball tournament.

The Edge of the World Music Festival has become one of the most sought after stages for performers on the international scene. Held in August at the Tlell Fall Fairgrounds.

The Coho Salmon Derby is held in late September around Sandspit, to coincide with the return of the Coho salmon to the area.

Recreation: On Haida Gwaii, you can find world-class salmon, halibut, and steelhead fishing in the numerous freshwater streams and abundant Pacific Ocean. Salmon fishing is plentiful in the spring and summer months, as millions of fish pass through the area’s waters to feed and to journey back to the spawning streams. The focus shifts in fall to the famous Coho salmon fly-fishing on the Tlell, Copper, and Takoun Rivers. Winter steelhead fishing provides a challenge for the avid fisherman, due to the steelhead's agility and ability to slip past nets and lines.

Numerous parks provide hiking opportunities along the rocky coast and though the untouched countryside.

Four trails run through Naikoon Provincial Park, ranging in hiking time from a couple of hours to several days. You can hike the steep Sleeping Beauty trail up Mount Genevieve to look over Queen Charlotte City and admire the Newcombe's Daisy, a flower only found on the Islands. On Moresby, there are trails for the more experienced hiker, including day hikes to Sandy Cove or a multi-day hike to the abandoned village of Cumshewa.

Haida Gwaii offers ocean kayaking opportunities to suit every skill level. Beginners will appreciate the protected waters of Skidgate, Masset, and Juskatla inlet by Port Clements. Haida Gwaii is famous for their more advanced waters, sure to challenge even the most experienced paddler. The most popular trips begin in Sandspit and travel into the Federal Gwaii Haanas Park (Please note - reservations must be made in advance to enter Gwaii Haanas. Check with the Federal Office in Sandspit).

Haida Gwaii is a diving paradise. Shore dives are possible from anywhere along the coastal road, and a small boat will provide access to many great dive sites in relatively sheltered west coast conditions. Ask for information in Queen Charlotte City about the best dive sites in Rennell Sound.

Crabbing along North Beach takes place during most of the year. One of the best places to take your family crabbing is the Tow Hill region. Some of the best dinners in the world can be found just metres from your campground, so make sure you take along a strong net and a bucket to put your crabs in!

Beachcombing is excellent here, with stories about the wonderful and sometimes wacky things found multiplying every year. While the most common find tends to be the glass floats used on Japanese fishing nets, passing freighters have recently been causing things like hockey pads and Nike shoes to wash up on shore. Along North Beach, treasures such as sperm whale teeth, agate gemstones, sand dollars, and scallop and razor clam shells are taken home as souvenirs of a wonderful visit.

Biking is becoming extremely popular, as visitors are finding that the communities are located far enough apart for a good workout, but not so far to be completely exhausting. Traffic is extremely light, there aren’t too many hills, and biking provides you with the opportunity to immerse yourself in the breathtaking scenery at a slower pace.

Environment: Theories suggest that the Haida Gwaii's unique and diverse landscape, unlike that of any other place in North America, may be due to its having escaped the last ice age, preserving

certain species. Some of the largest trees in the world are located in the Islands' lush, temperate coastal rainforests, including Sitka spruce, western hemlock, giant red cedar, and yellow cypress.

Wildlife viewing conditions are ideal throughout the islands, which host hundreds of species, many of which are endangered and not found elsewhere, such as the world’s largest black bear. Deer are abundant - seeing 30 deer on an evening drive is a common occurrence. The Islands are a bird-watcher's paradise - one quarter of Canada’s Pacific Coast population breeds here. Species to be found include storm petrels, auklets, tufted puffins, ancient murrelets, and peregrine falcons. In addition, Steller sea lions, grey whales, orcas, and seals cruise the coast during the late spring and summer. Pristine sandy beaches stretch as far as the eye can see, and snow-capped mountains soar in the distance.

Provincial and Federal Parks: Much of Haida Gwaii is protected parkland.

Gwaii Haanas is a large federal park located in the South Moresby region. There are no roads in this park, and access is by boat and chartered floatplane only. Visitors must make reservations with the Gwaii Haanas park office, and undergo a mandatory orientation session. Gwaii Haanas is full of wildlife and plant life found nowhere else - including the rest of Haida Gwaii. Anthony Island, a UNESCO world cultural heritage site, is located within the park. Gwaii Haanas was recently named the best National Park in North America by National Geographic Magazine. Panelists were impressed with Gwaii Haanas' "high cultural integrity" and called it "A great model for other regions."

Naikoon Provincial Park is located in the North Graham Island region. This is more accessible than Gwaii Haanas, with two provincial campgrounds that are open during the camping season. Naikoon offers multiple hiking trails that range from easy 1-hour hikes to multi-day wilderness camping adventures, as well as crabbing opportunities and breathtaking ocean views on beautiful beaches that seem to go on forever. Rose Spit and Tlell beach, in particular, are excellent spots for observing birds migrating south on the Pacific Flyway. Niho Land & Cattle Company Ltd. purchased several very rare private acreages located inside pristine Naikoon Park over 20 years ago, and have developed some of this select parkland property into large residential oceanfront lots.

Haida Gwaii truly fits the description of Gwaii Haanas, the "islands of beauty" or "islands of wonder".